The Songwriting Workshop is an opportunity to turn the story in your head into the song on your lips in an immersive experience with two master songwriters.

A Song Runs Through It

Elk River Arts and Lectures presents award-winning songwriters and acclaimed recording artists, John Lowell and Joe Newberry, to share the art of songwriting in an intimate and immersive two-night workshop, October 17 and 18, 2022. 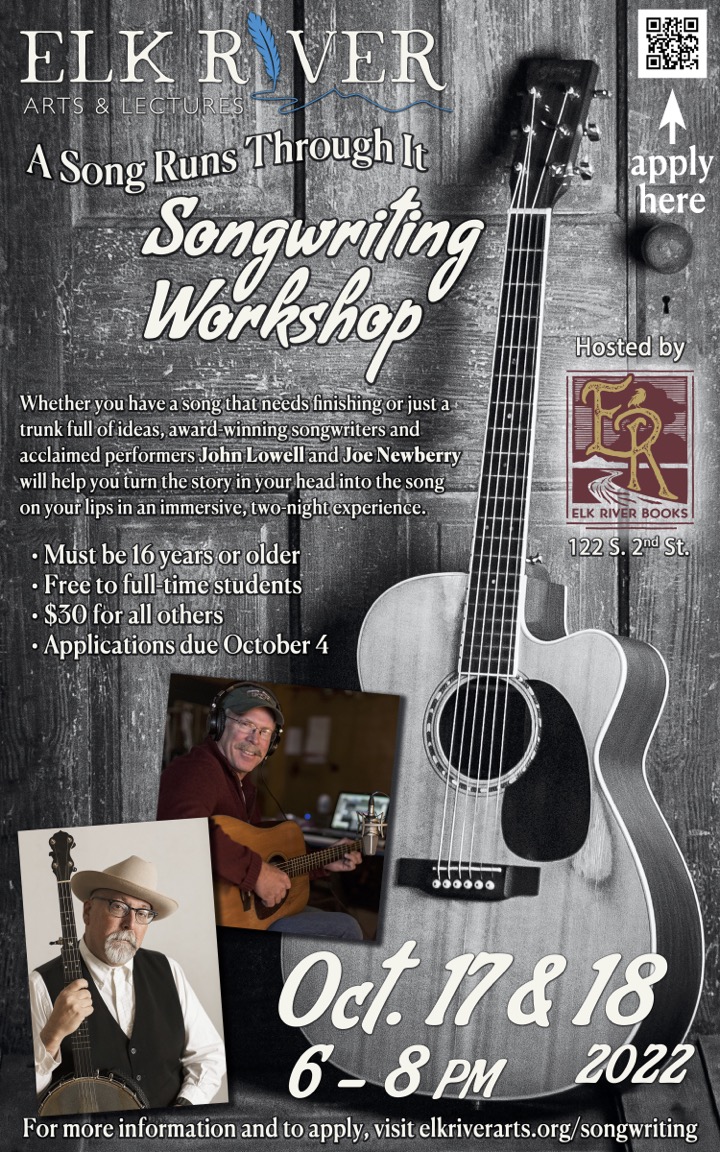 Songs aren’t just plucked from the air, they are written expressions of the heart. They are stories told in the songwriter’s unique voice, and a lens to view the world around us – and within us. You may have heard the famous description of country music as “three chords and the truth.” To John and Joe, who write and perform in a variety of genres, what matters most is finding the truth that connects writers to their one-of-a-kind story. That’s what their songwriting workshop is all about.

The course is open to all levels of expertise. John and Joe will help you focus on making your good songs even better, or get you started if you only have a trunk full of ideas. The workshop will use examples of different types of songs—narrative, chorus/verse, free-form—with an eye and ear toward simplifying the words to uncover the heart of the song. Through word play and writing, writing, and more writing, the song in your head can become the song on your lips!

Apply for the Songwriting Workshop here

John and Joe will share stories from the road, successes and challenges, examples of writings in progress, and they will talk about the songwriting and performing process. Then it is time to get down to the business of writing and working on songs. Students will be encouraged to share works in progress, wherever they are in the process, even if their journey is just beginning.

After immersion in the creative world of songwriting with contemporaries and peers, students can foster a new community of friends, a support system, a songwriting notebook filled with ideas and notes and tips, and a new sense of their unique voice that will help them write and perform with confidence and clarity.

The workshop concludes with a miniconcert in-the-round with performances by John Lowell, Joe Newberry, and any students with songs they’d like to perform: from 8:30 pm to 9:30 pm Tuesday, October 18. Open to friends, family, and innocent bystanders.

Who can attend? The workshop is limited to 12 students, 16 years and older.

How much? Free to high school and college students; for all others, $30. (We are keeping the tuition extremely low to make this incredible opportunity available to all. Additional donations welcomed from those who can afford more.)

What will I need? A recording device (smartphones will do), an imagination, and a desire to write songs. It’s not required, but we highly recommend bringing your own instrument if you have one.

Where will it be held? Elk River Books, 122 South Second Street, Livingston, MT

Email director@elkriverarts.org with any questions.

Apply for the Songwriting Workshop Here 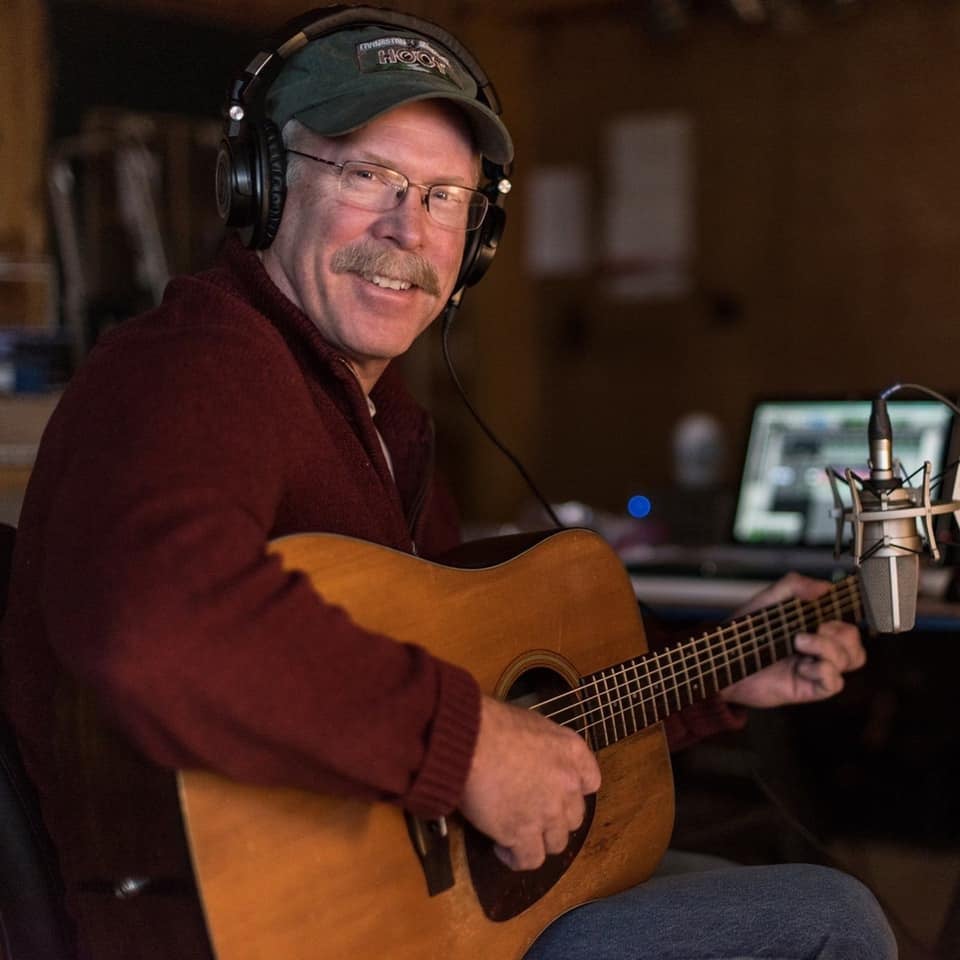 Montana based singer/songwriter John Lowell has a love affair with the American West. He’s lived in the West since he was three months old and loves the history, topography, culture and the people.

Lowell won the Grand Prize in the Hazel Dickens Songwriting Contest in 2021, considered the highest award in songwriting. He tours with his bands Kane’s River, Growling Old Men, Coppo/Kaerner/Lowell and the John Lowell Band in Europe, Canada and on festival stages all over the United States.

He’s a member of the International Bluegrass Music Association’s songwriting committee and has been a featured writer for their annual conference. His songs have been covered by dozens of musicians all over the world. He performed and taught songwriting at 2022 Antlers & Acorns Songwriter’s Festival in Boone, NC, Sore Fingers Camp in the UK, Montana Fiddle Camp and will perform at the 30A Songwriters Festival in north Florida. He’s recorded three solo albums among the dozen he’s released with various bands.

Lowell is also an accomplished flat pick guitarist and guitar instructor. His songs are often stories of people in the West, and he weaves beautiful tales about real and imagined people. His “pandemic project” was “She’s Leaving Cheyenne,” an album of 12 Western-themed songs, including covers of classic cowboy songs. It was named album of the year by Wyoming Public Radio. His instrumentals are featured in several television shows, including Anthony Bourdain’s “No Reservations” and a show on the Discovery Channel called “Homestead Rescue” he hasn’t watched – yet.

The title track and first single is one of Lowell’s favorite cuts on the recording. “I was trying not to write a cowboy song, and I did. When the hook came into my head, I thought, ‘well, here we go.’ I figured it earned a spot on the record.”

For more information on John Lowell, go to www.johnlowell.com

“His lyrics read like a cross between Longfellow and Johnny Cash.” ~ Independent Weekly

Known around the world for his clawhammer banjo playing, Joe Newberry is also a powerful guitarist, singer and songwriter. The Gibson Brothers’ version of his song “Singing As We Rise,” featuring guest vocalist Ricky Skaggs, won the 2012 IBMA “Gospel Recorded Performance” Award. With Eric Gibson, he shared the 2013 IBMA “Song of the Year” Award for “They Called It Music.”

A longtime and frequent guest on A Prairie Home Companion, he was a featured singer on the Transatlantic Sessions 2016 tour of the U.K. with fiddler Aly Bain and Dobro master Jerry Douglas, and at the Transatlantic Sessions debut at Merlefest in 2017 with fellow singers James Taylor, Sarah Jarosz, Declan O’Rourke, Karen Matheson, and Maura O’Connell.  In addition to performing solo, Joe plays in a duo with mandolin icon Mike Compton, and also performs with the dynamic fiddler and step-dancer April Verch.

Growing up in a family full of singers and dancers, Joe took up the guitar and banjo as a teenager and learned fiddle tunes from great Missouri fiddlers. He moved to North Carolina as a young man and quickly became an anchor of the incredible music scene in the state. He does solo and studio work, and plays and teaches at festivals and workshops in North America and abroad.

For more information about Joe Newberry, go to www.joenewberry.biz